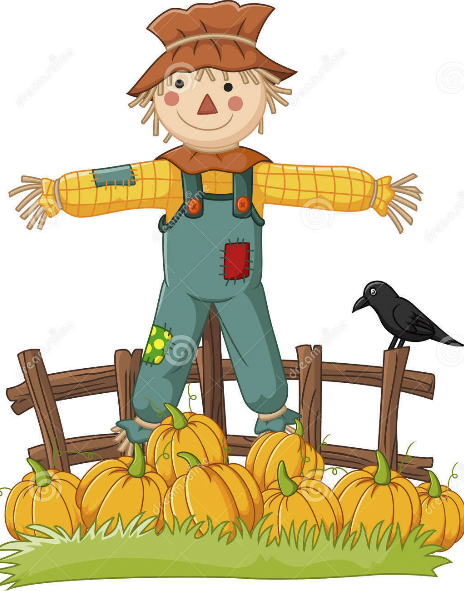 In Germany, scarecrows were wooden and shaped to look like witches. Witch scarecrows were supposed to hasten the coming of spring. In medieval Britain, young boys and girls were used as live scarecrows or “bird scarers.” They would patrol the fields of crops and scare away birds by waving their arms or throwing stones. In later times, farmers stuffed sacks of straw, made faces of gourds, and leaned the straw man against pole to scare away birds.

In the United States, immigrant German farmers made human looking scarecrows called “bootzamon,” which later changed to bogeyman. They were dressed in old clothes with a large red handkerchief around their necks.

There’s one thing that represents October more than anything else, and it’s not Halloween (though it’s involved). That thing? The pumpkin. It starts appearing on shelves and farmers market’s stands on the last week or two of September and is the herald that lets you know that Pumpkin Pies, Jack-o-Lanterns, and all the joys of fall are just around the corner. National Pumpkin Day celebrates these noble squashes, and the history and tradition tied up in their iconic orangeness.

let’s learn a little bit about the Pumpkin in honor of National Pumpkin Day, starting with what the word pumpkin means. It’s pretty simple, as it comes from the Greek word pepon, or ‘Large Melon’, but it didn’t go straight to the pumpkin. First, it was pompon to the French, and then pumpion to the British. It was the Americans that finally changed the word to its present Pumpkin, and so it’s been ever since! National Pumpkin Day is a great opportunity to add this delicious squash to your diet.